Hotels, motels and where to sleep

Restaurant, taverns and where to eat

Cultural (and not so cultural) events

Description of the Brosno Lake Dragon

Brosno Lake Dragon is a legendary creature that is said to live in Lake Brosno in Tver Region of Russia. First records of this creature date back to middle 13th century when this dragon is said to attack a company of Tatar- Mongol horsemen that invaded Russia at the time. The stories of this supposedly living dinosaur still circulate around the region. Despite the fact that the lake is situated in the middle of European part of Russia it is fairly isolated and few people make it here.

Lake Brosno is situated in Tver Oblast near Moscow, but it feels that it is thousands of miles away from any center of Civilization. Few abandoned villages are found around the Lake Brosno, but most of houses are falling apart due to age. It is not wise to use any of them for sleep due to health risks. It is a fairly deep lake measuring at 43 meters (140 feet) in its deepest point. Most divers reports seeing a sunken church in the Western part of the island. No archaeological digs were made on the bottom of the lake so it is hard to estimate the date of the building and possible threat to divers who want to descend to the bottom of the lake. Lake Brosno is full of perch, burbot and many other species of fish so theoretically there is a sizeable population of food for some large unknown specie. 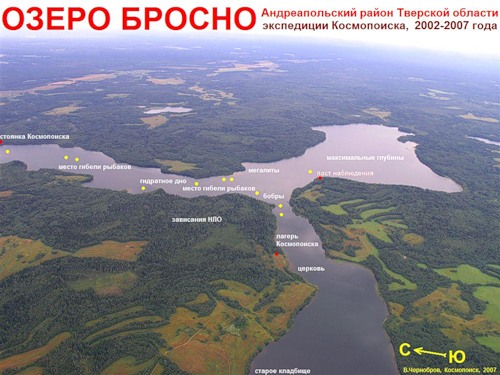 Hotels, motels and where to sleep

Restaurant, taverns and where to eat

Cultural (and not so cultural) events